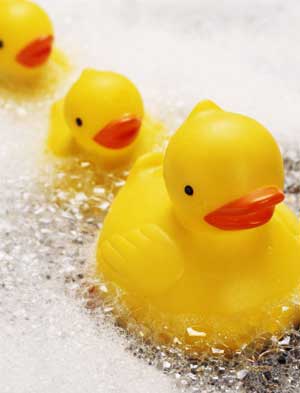 Susannah also was protesting against Charissa removing all of the toilet paper wrappers (we get our tp in bulk and they’re all wrapped up like at hotels). She said they were all going to get wet (since the tp is by the tub). So I assured her it was not the end of the world, and that if she didn’t want it to get wet, she should forgo her rubber ducky races 😀 Of course I was just teasing her…but then later she was joking and told one of the girls that the big duck won last time, but this time she was going to give the little one a chance!

Then Anna and Bekah had a plan to ‘rain’ down every rubber duck we have onto Susannah…this is what happened (written by Mommy):

“How would YOU like ten ugly ducklings pelting down on your head during YOUR shower?!”

Susannah to Cassia, when she found out Cassia was laughing her head off at their younger sisters’ dastardly plan to “rain” all the rubber duckies on her during her shower!

“And THAT guy is NOT a duck!” (Some “fisherman” guy from a Fisher Price boat set that is as old as the hills!)

Susannah is so hilarious! I love her 😀

p.s. I very much hope that we got that Fisher Price guy way before I was born, because I remember playing with that old-as-the-hills-fisherman 😀