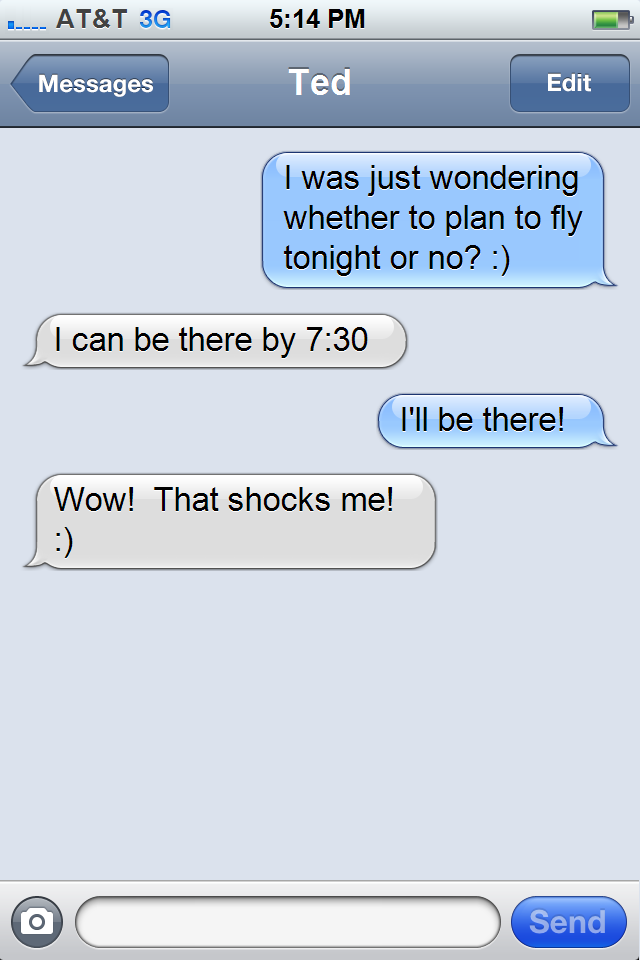 He got out of the plane after the first few landings, then I did 6 or 7 by myself.  When I finally came in from practicing the landings, he said, “I thought I was going to have to shoot you down!”  Later he mentioned signing me off at other airports so that I wouldn’t be bored at Rochester, “But maybe you wouldn’t get bored, it didn’t seem like it tonight!”  Lol!

Just a couple of days later, I went flying again.   After the first landing, Ted said, “Okay, I just can’t take it anymore!  Go drop me off now!” 😀   Then he went home and didn’t stick around the airport.  That was a weird feeling to know that not only was my instructor not in the plane…but not even on the airport!  Not that he could do much if I got in trouble, lol!

After I dropped Ted off, I flew over to our house and circled it a couple of times, and ‘waved’ at my siblings 🙂  Then I flew back and did 3 or 4 more take offs and landings.  My next to last landing was when another pilot came into the traffic pattern and I had to talk to him over the radio (horrors!), and I got completely flustered and reported that I was in the opposite part of the traffic pattern 😀  But as I said before, we got it worked out.  He was fueling up when I taxied to put the plane away and I sheepishly waved.  “Sorry…I’m the student-pilot-who’s-scared-to-talk-on-the-radio.” 😀

Since Ted wasn’t there that time, I had to put the airplane away by myself.  Pushing the plane is harder than pulling it, and I discovered that there is the tiniest bit of incline to get into the hangar 😀  After pushing and pushing and PUSHING and throwing all of my weight against it, I finally got it in.   I sure hope nobody was watching, because I’m sure I looked ridiculous! We always have to text our instructors to let them know when we’re flying, and when we’ve landed, so that they know we’re okay.  So I texted Ted this picture of the airplane in the hangar and said, “I may be more proud of the fact that I parked it by myself than that I landed it!”

I’ve finally worked out a system for pushing it in…and I’ve learned you don’t stop on the incline! 😀 Kristina, the other lady who is learning to fly right now as well, soloed not too long after me.  One day we were both getting ready to fly, and we were talking about our solos.  We both agreed that it was fun that we could fly by ourselves, but we missed having our instructors in the plane with us.  It’s just not quite as fun by yourself!

That time, I met Matt, who also works at the airport.  I was taxiing back to the hangar after I was done flying, and I saw someone come over in the golf cart to the hangar and open the hangar door.   He introduced himself and said that Ted had asked him to help me push the airplane in 😀   It goes in a lot easier with two people!

Almost every time I come home from flying I do my own version of Dory’s song, “Oh, oh, I love to flyyyyy!”  and my siblings say, “Yes Jessica, we know!”

The next time I went flying, I practiced some of the maneuvers Ted had taught me.  Slow flight is one that simulates being able to land at a slow speed.  Only you practice it 3,500 ft MSL (mean sea level) which would be about 2,800 ft. AGL (above ground level).  You get it flying so slow that the stall horn comes on, then you add enough power to keep it from sinking.  You want to stay right on 3,500 ft, as well as keep it on a certain heading (like 360°/North), and keep that stall horn whining 😀  You can fly the airplane as slow as 49 miles an hour or so that way 🙂

Some other maneuvers you have to practice up high are steep turns where you bank your wings 45°, AND keep it on altitude (right at 3,500 ft.), AND at a certain airspeed AND turn out at a certain heading. Those are fun!

Also, there’s stalls, which I like!  At least I like the power off stalls (simulating a stall while you were landing).  The power on stalls, which simulate a stall during takeoff,  are a little more ‘exciting’ 😀

There are turns about a point.  You pick out a point, and my instructor taught me that crossroads make a good ‘point’ 🙂  You have to evenly fly around the circle (and make sure you stay on your altitude…right on 1,600 ft.).  This is a good maneuver for flying over your house 😉 Then there are rectangular patterns.   On these you usually pick out a country block, and fly around it.  You have to correct for the wind, which means your airplane’s nose might be pointed sideways a bit, but you’re still flying straight 🙂  This is called ‘crabbing’: Then there are S turns 🙂  Whenever you’re about to cross the road, your wings should be level and parallel to the road.  With all of these maneuvers you have to correct for the wind, and with the S turns, you work at making the points at the top of the arcs evenly spaced from the road.  For example, the ‘2’ and the ‘4’ on the picture should be about the same distance from the road.  Depending on the wind, you’re pattern might not look like such a perfect ‘S’, but you should have those two places evenly spaced, and your wings level when you cross the road 🙂 Around the first part of August, Jim put out an email saying that they were getting ready to change the oil in 12874.  I thought it would be interesting to see how to do that, so I asked if I could come ‘help’…errrr watch!

I’ve never had much of a desire to learn how the spaghetti of wires and pipes and things under the car hood work.  I’m just glad that they work!  I can add air, oil, or gas, but that’s about it.

At first I felt the same way about the airplane, but one of the things I have to know for my oral test is about a few of the things inside of my airplane.  Like it has 4 cylinders, 2 magnetos, and 2 spark plugs for each cylinder…that it’s a normally aspirated engine, etc 😀   I wanted to see what all this stuff was that they were talking about, and I kind of wanted to know how it worked.  Once Ted had the cowling off of the Cherokee, and I got to see the cylinders, magnetos and spark plugs on it, and since I am a visual learner, that really helped cement it better 🙂

Jim said that I definitely could help/watch, so I went over one evening to help him and some other club members change the oil and clean the spark plugs.  I didn’t expect to help much, because I didn’t have a clue what to do, and I didn’t want to get in the way, but Jim was good about including me and showing me what to do.  I got to unscrew the oil filter,  screw on the new one, pour in the new oil, and wash up the plane.  There’s a certain tool that tells you exactly how tight to screw on the filter and the spark plugs, so Jim showed me how to use that as well.

Jim had me put some cloths underneath the filter before I unscrewed it to help catch any oil that would come out, but then I accidentally dropped the filter, and caught it again underneath the airplane with the cloths.  Tim, who they call ‘Doc’ said, “It’s a boy!” and we all started laughing. Oil was all over my hands, and the filter was all wrapped up in it’s ‘blankets’.  Then Jim told me, “Go take care of your newborn now!”

A week or two later, I went to go flying, but when I got to the airport there were gusts of 14 knots going across the runway.  I hadn’t had much experience with that kind of wind yet, so I texted Ted saying that I guessed that I shouldn’t fly?

He said that I probably shouldn’t, but did I want him to help me practice crosswind landings?  I said of course!  😀

So once he got there, we taxied to the runway, but when we checked the magnetos during the engine run-up, one of them ran really rough, so we had to take it back to the hangar.  Ted cleaned the spark plugs, to see if that was the problem, and I got to help.  He showed me out to clean out the lead, sandblast them, clean them with a wire brush, and then put them back on.  It was so interesting to see how it all worked and went together 🙂

Once he had them all back on, he asked if I wanted to test it out.  Is that a question?!  Of course I said yes!!! So we got to practice some crosswind landings after all 🙂