For 10 seconds I screamed like a little girl, not out of fear, not with thoughts of regret, just out of sheer terror of a feeling I had never felt in my entire life, and it. WAS. AWESOME! 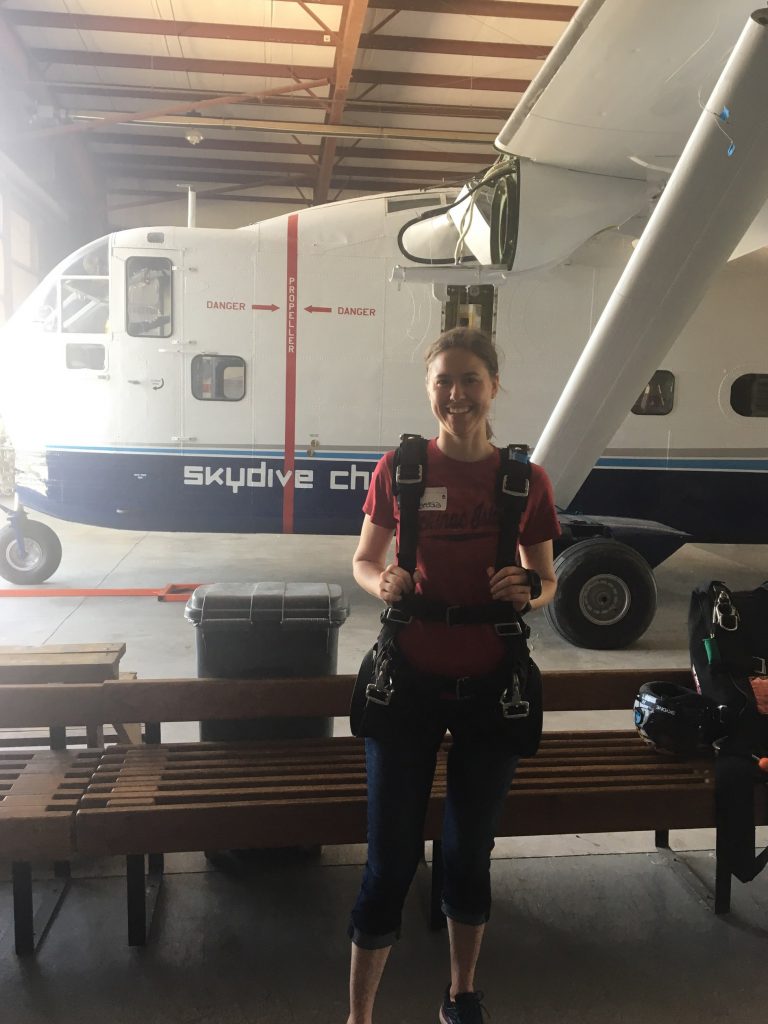 As the twin Otter plane pushed higher and higher into the sky, some sat quietly in anticipation while others laughed and made jokes. My friend was sitting right beside me and asked if I was nervous, no, just pumped and ready to do this. We had had quite a bit of a wait time on the ground and I was ready to cross this off my bucket list, all feelings of nervousness I had felt that morning were gone. 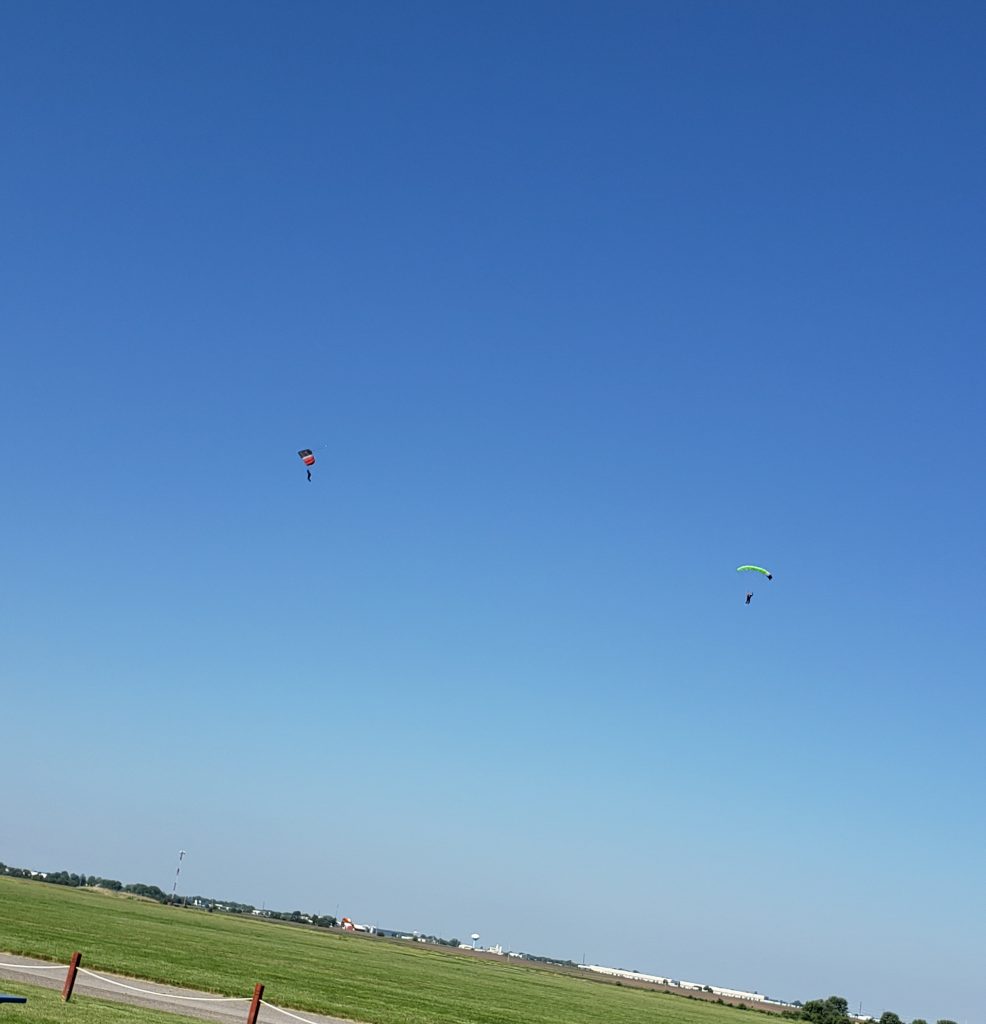 We were the last ones off the plane, this was it, it was my turn. Strapped to each other we shuffle walked on our knees to the door, I glanced down, 13,000 feet below me lay the ground in precise squares of various colors like a patchwork quilt, a few clouds floated through the sky. Everything looked just like it always had when I’ve been up in a plane, but this time, this time was different. A strong wind blew in my face, even though when we had taken off it was a warm almost hot day, it felt like the crisp air conditioning of a building on a hot summer day.

As I took a brief moment to look down, Jeff, my tandem went over his last check and prepared us for the fall, my only thought was “Is this really happening?”

There was no 1 2 3 jump, it was just a sudden movement, I followed directions of what I was supposed to do and then suddenly he jumped and I was pushed. 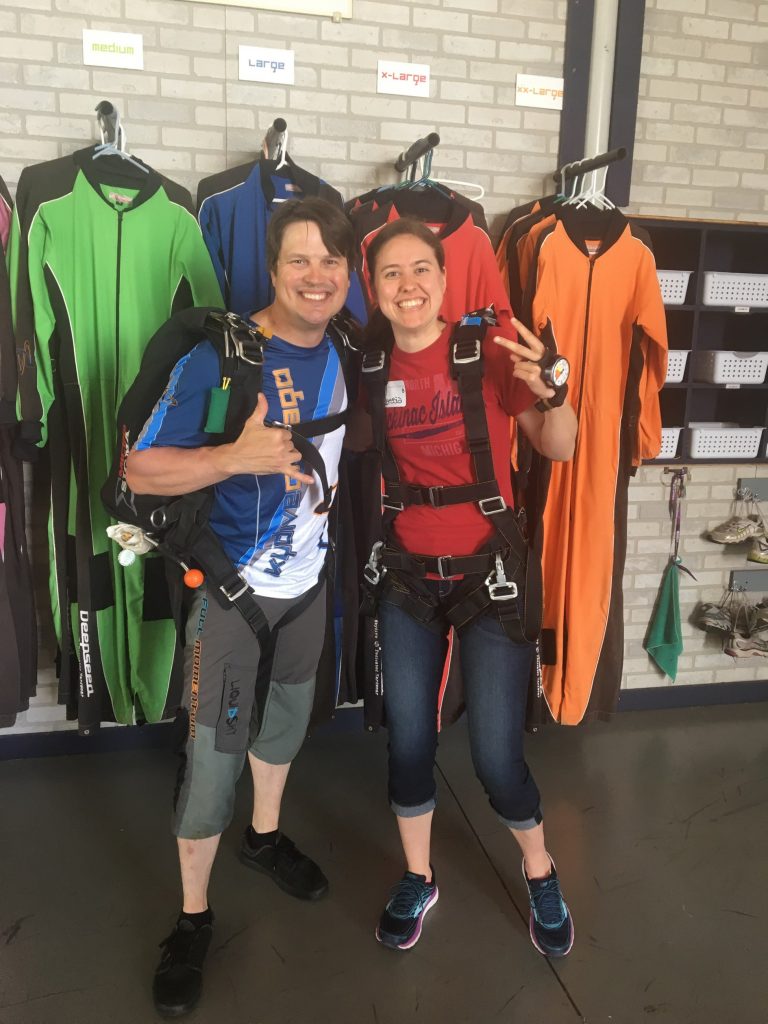 For 10 seconds the world did not exist, nothingness and terror mixed with the biggest adrenaline rush of my life! Words can’t even describe what I felt in those seconds, I was simply a screaming and falling object 13,000 feet in the air forgetting everything I was told, I even forgot about Jeff.

All of the sudden I was brought back to reality when I  felt a double tap on my shoulder, it was Jeff,  I was now grateful for the double and triple checks he did on our harness.

Because I had forgotten  everything, he directed me to put my arms out. We then did our “HAT” check. Horizon, altimeter, handle touches (aka finding the parachute cord). Then we simply free fell for the rest of our 60 seconds, continuously checking the altimeter to watch for our 5,500 mark to pull our chute.

Within seconds we were at 5,500 feet, I knew it was time to pull it but I froze for a split second.

I reached down, felt the golf ball on the end of the cord and pulled. Except nothing happened because I didn’t pull hard enough. “Crap” I thought. I can’t get it and tried pulling harder. 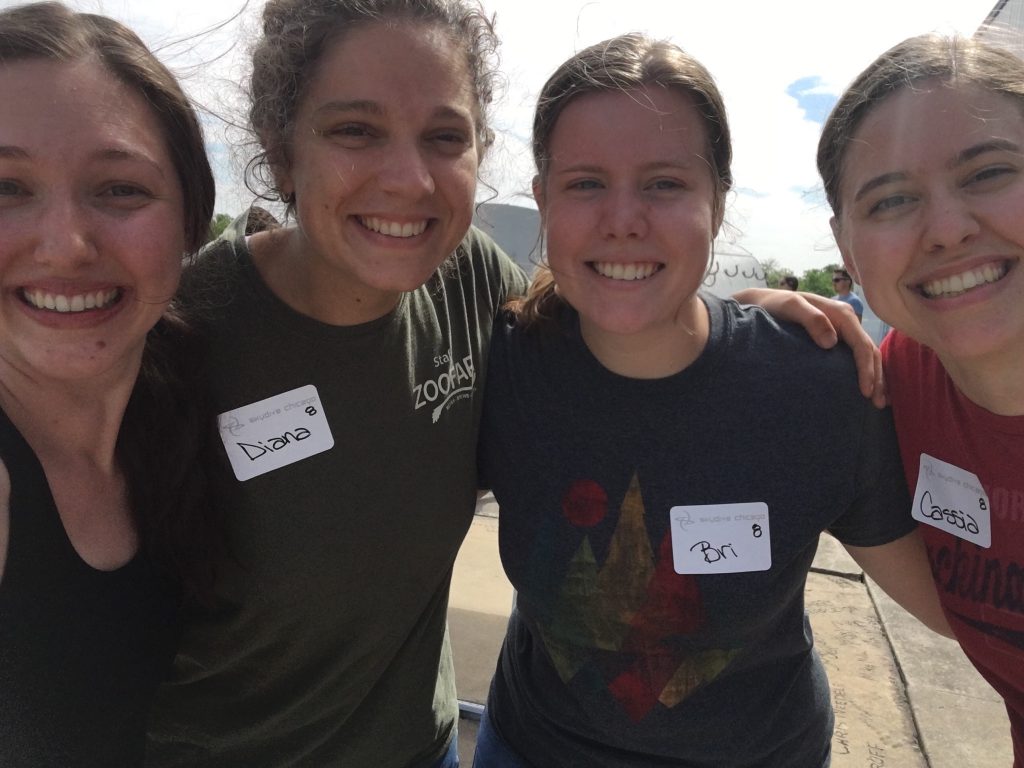 A sudden jolt upwards brought our free fall to a screeching halt, we transitioned from a “falling rock” to a “bird” floating through the sky and even though the ground was continuing to come at us at a rapid rate, it felt like a soft gentle decent. The wind was no longer pounding in my ears and Jeff and I could carry on a normal conversation, hearing each other perfectly. I felt the pull of my harness, not in a uncomfortable way, but just in a “I’m literally hanging thousands of feet in the air” kind of way.

Jeff steered us around pointing out my friends further away and slightly farther down than us, as well as explaining the landscape of where we were at and what we were seeing. We also did one “Red” turn/spin.

As much as I was enjoying it and did not want it to end, I was starting to feel nauseous. I put my hands back on the harness, and Jeff steered us to the landing zone with the same control as if he were driving a car down a winding road (I didn’t know you could steer a parachute with such precision). At just the right time I lifted my legs straight out and we came in for a landing. (Yes, we butt slided in.)

Like I said amazing does not even begin to describe it, I walked away with a load of life stress lifted off of my shoulders, a new appreciation for adventure and a new sense of living life in the moment!

Someone stated that I was kind of young to have a bucket list, I highly disagree! Life is short, live it now!

I’ve already bought my second jump, does that tell you anything?

The Day I was Pushed out of an Airplane